Synopsis of the film

Intermediate School 318 in Brooklyn, New York, is housed in a squat concrete building on a dingy inner-city block. The school’s exterior offers little to impress but, in room 319, something extraordinary is happening. Over the last decade, hundreds of Ms. Vicary’s students have learned to play chess, one of the world’s oldest and most complex games; each day, the class fills with kids both well on their way to becoming the next Bobby Fischer and others just learning how to move the pieces. The school has a powerhouse chess team that has won 26 national chess titles — more than any other junior high school in the country. It’s a particularly notable achievement for I.S. 318, a Title I school, where more than 60 percent of students are from homes with incomes well below the federal poverty line.

Brooklyn Castle follows five of the school’s chess team members for one year, and documents their challenges and triumphs both on and off the chessboard. Justus is a prodigiously talented 10-year-old trying to navigate the unfamiliar pressures that come with newfound success and adulation. Eleven year old Patrick struggles with ADHD, and uses chess to improve his concentration. Alexis, 12, already views chess as a means to attain a higher education and support his immigrant family. Rochelle – an ambitious 13-year-old – strives to become the first African-American female to reach the level of chess master. And the team’s emotional and outspoken leader, 12-year-old Pobo, rallies his fellow students against school budget cuts while running for school president. In each of these young teens, we witness the profound ways that learning and playing the beautiful and complex game of chess has imbued the lives of these equally beautiful and complex students at an underfunded urban public school.

This year, I.S. 318′s chess team is the strongest in school history. But as the New York City public school system continues to reel from state and citywide financial crises, I.S. 318′s budget has been cut by more than $1 million. After school programs like chess are often frontline budgetary casualties, despite their proven success in improving students’ development in ways often unattainable in the classroom, especially in high-needs areas.

Coaches John Galvin and Elizabeth Vicary deeply believe that their students have benefitted from playing chess, and they are committed to keeping their program intact and alive. For Justus, Patrick, Alexis, Pobo and Rochelle, chess is more than just a game. It is a theatre of hard work and determination where they negotiate larger conflicts by maneuvering their armies of rooks, knights, pawns, and bishops – and where they can become kings and queens, far beyond the tabletop battlefield. 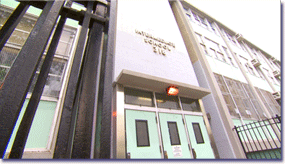 Brooklyn, New York’s Intermediate School 318 is a testament to the transformational powers of chess, quality afterschool programming, and a dedicated staff. The school’s chess program began as a loose gathering of chess enthusiasts – the “Chess Nuts,” as they called themselves – in the early ‘90s. Elizabeth Vicary, then working for nonprofit Chess-in-the-Schools, arrived at I.S. 318 in 1999 to coach a team of just 10 kids who’d never before competed in a tournament. By the end of her first year, the school had a National title and a reason to be excited about chess. The program expanded exponentially over the following years, and today I.S. 318 boasts a team of nearly 100 students and a display case showcasing a staggering number of chess trophies. The school currently holds more National chess titles than any other junior high school in the country; offers 45 afterschool programs in subjects as diverse as robotics, botany and tennis; and is one of New York City’s most successful schools. 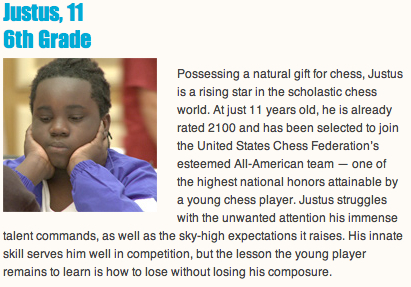 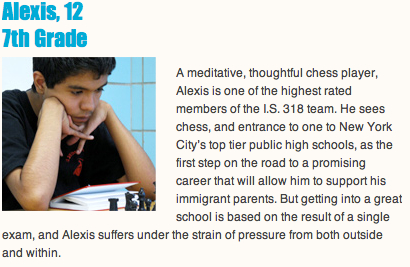 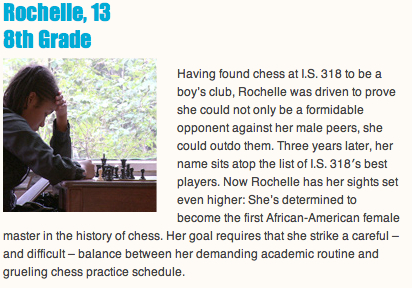 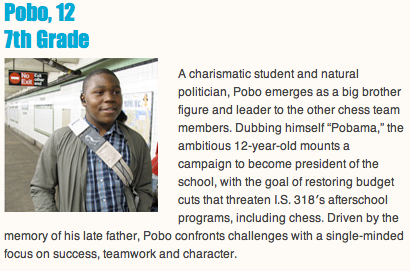 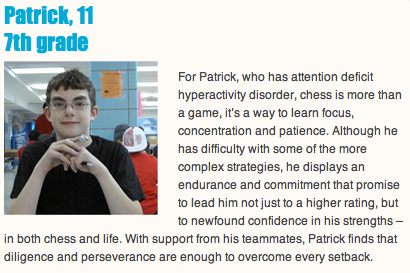 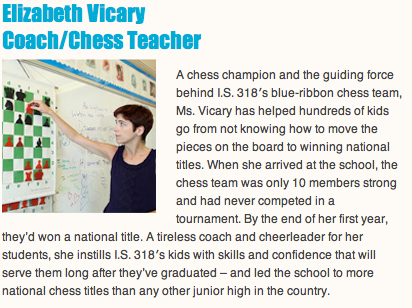 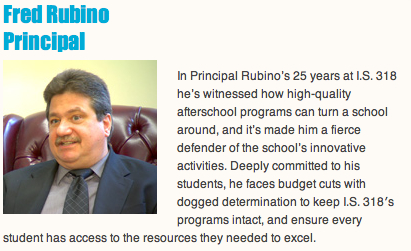