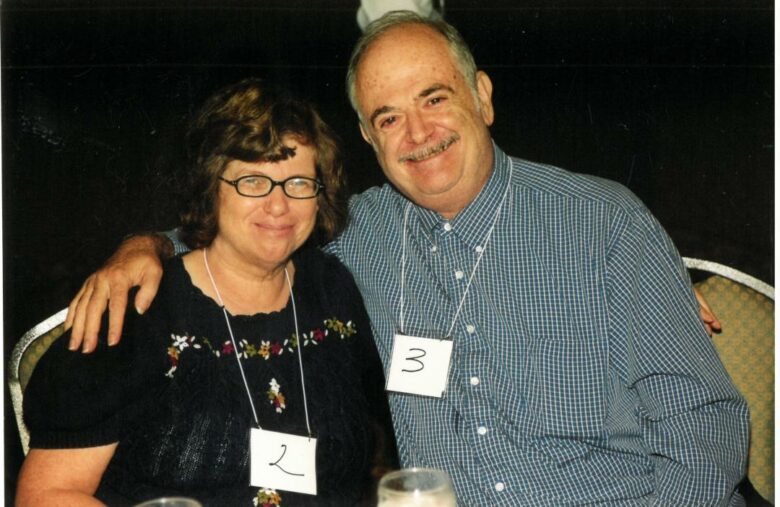 Anyone who has attended a U.S. Open since 1974 has seen a couple—always together—walking from meeting to meeting in matching tee shirts that often sported the logos of past Opens. Gradually over the years, quick, sure strides between workshops became more cautious, and eventually a walker appeared in front of Myron. But neither their judgment nor their dedication to US Chess ever lost a step.

“Between the two of us, we’ve given over 100 years to chess,” Myron said in an interview in 2015. They donated both hard work and funding. Music was another passion, particularly the Arizona Music Hall of Fame, which they likewise supported. It’s impossible to write about Myron, even on his passing, without including Rachel. And Myron would want it that way.

For the first 20 years of his life, Myron lived in Los Angeles, California. Then he moved to Arizona. The two met in the fall of 1962 at an Arizona State University football after-game dance. “I went looking for a boyfriend,” Rachel once admitted with a laugh, recalling her 18-year-old self. Myron, however, stopped by on his way home to North Phoenix simply to outwait the traffic snarl. It was love at first dance. Ever after, they were together. Really together. “We’ve tried to share our lives, not just share a room,” Myron said.

Because the gift of life on Earth is finite, there is an inevitable end to even the greatest partnerships. Myron died Christmas Eve, 2021.

A lifetime of helping others

“One of the deepest bonds that made Myron and Rachel such a legendary team was a shared commitment to helping people,” Al Lawrence said. Lawrence worked with Myron and then Rachel when they were members of the Policy Board (now the Executive Board) of US Chess and he was executive director. Later, as managing director of the US Chess Trust, Lawrence again worked alongside Myron. “Right up to his final days, his focus was on helping others. Chess was one of the ways he knew lives could be changed. So he gave thousands and thousands of hours to chess on local, state, and national levels.”

Lieberman started organizing and directing chess tournaments as president of his high school chess club in 1957. He played correspondence games with a transfer student from Germany after that student returned to Europe. During the 1960s, Myron was an active member of the Organization of Western Chessmen. This was his introduction to US Chess and organized chess. He organized a match by teletype between Motorola facilities in Phoenix and Scotland. Myron saw what chess had done for many children written off by others. That was a pivotal factor in his decision to volunteer for advocacy of the value of chess.

Six decades of service to US Chess

Long the primary organizer and tournament director (TD) in central Arizona, for 25 years, Lieberman was president of the Arizona Chess Association, which later became the Arizona Chess Federation, Inc. He organized or directed many Arizona state chess championships during this time. He was chief assistant TD at the Statham tournaments in Lone Pine, California, from 1976 to 1981, and Myron wrote the chapter on history and statistics in The Best of Lone Pine by Grefe and Waterman. He organized the U.S. Open in 1978 in Phoenix and other national tournaments in the following two decades, while holding special events for the Phoenix Chess Club.

The current president of US Chess, Mike Hoffpauir, recalls, “I first met Myron Lieberman and his beloved Rachel about 2008 when I became a Delegate for the Virginia State Chapter and attended my first Delegates Meeting. I observed him carefully when he spoke (which was frequently), noting his deep knowledge of US Chess Bylaws, business practices, and ‘chess politics.’ Later I learned he was a former US Chess Secretary and Vice President. I immediately developed a deep respect for his considerable knowledge and actually came to rely on it, from time-to-time, when I needed more context on a US Chess issue. The entire US Chess community is saddened by his loss, but his legacy lives on in the structure and activities of our organization. Rest in peace, Myron, and thank you for all you have done.”

Myron earned the titles of US Chess National Tournament Director and FIDE International Arbiter. He served as US Chess national Secretary (1978-81), Treasurer (1981-84), and Vice President (1984-87). At the time of his death, he also served as Secretary of the US Chess Trust and as US Chess Delegate at Large, as well as chair of the US Chess Outreach Committee.

“Myron was as selfless and effective a volunteer as I’ve ever been fortunate enough to meet and work with, both at US Chess and the US Chess Trust. He saw that chess was a way to turn young lives around, and so he gave much of his own life to sharing the benefits of our game. He and Rachel were blessed with a lifelong love and gave back that blessing through their work for others. All of us at the US Chess Trust will miss and never forget Myron Lieberman.”

“The dedication that Myron had for the game and promoting the benefits of chess for those of all ages all these years is unsurpassed. He can rest in peace knowing he helped to provide positive benefits for those who loved the game as he did. He has been a cornerstone of the foundation of US Chess and will be missed by all.”

Samford Fellows So and Yip Win US Championship Titles in St. Louis!