2011 FIDE Candidates Matches: U.S. Chess Champion Gata Kamsky Leads with the Only Win in 1st Round!

Eight Strong GMs Compete to Qualify as Challenger for the 2012 World Champion match. U.S. Chess Champion, Gata Kamsky is one of them!

From May 3-27, 2011 the FIDE Candidates matches are being held in Kazan, the capital of the Republic of Tatarstan, with eight strong GMs competing to qualify as Challenger for the 2012 World Champion match.

Time controls in the four regular games are 120 minutes for the first 40 moves, 60 minutes for the next 20 moves and then 15 minutes for the rest of the game, plus an additional 30 seconds per move starting from move 61. In case of a tie there will be four rapid chess games, and if the tie is still not broken then up to five two-game blitz matches 5’+3″. Finally there may be a sudden-death final decider. 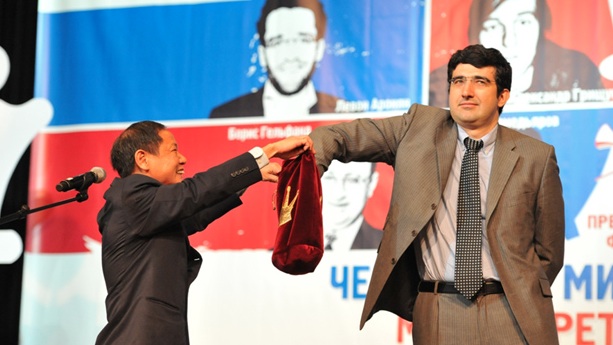 Only One Win – To Kamsky

American citizen Gata Kamsky, born in Tatarstan, runner up of the world championship match with Karpov in Elista, is the first participant, who won the game in FIDE Candidates Matches in Kazan. Playing Black with the ex world champion Veselin Topalov of Bulgaria in Round 2, he punished opponent’s bad day and won after two hours, only when white position totally collapsed. Topalov prepared some novelty in the opening, but very quick lost kompas and the game. At the press conference, he was very short and clear, characterising his game: “I played very badly”.

Aronjan, who yesterday lost his chance to start the event with win at least several times, was with Black pieces and satisfied with the draw. In a not very much dramatic game, in completely equal position, Grischuk proposed to share the point, immediately excepted by Armenian GM.

In the first game Gelfand was in quite big troubles, and playing White was completely different. Mamedyarov should defend himself very carefully. In the most critical moment, Azeri GM was close to jump into a well-prepared trap. He already started to believe, how he would get a piece, but in realty he would loose a pawn. When he escaped out of this dangerous situation, he found the way to draw.After a quick draw in Round 1 Kramnik and Radjabov finished last. In typically Catalan structure ex world champion had small initiative, though it was absolutely not enough to do something concrete.

About the City of Kazan