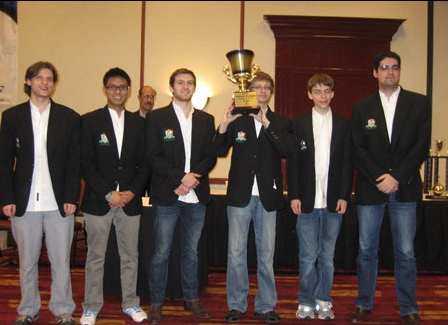 Top University chess players will battle it out at Princeton University.

Every year, the ‘Pan Am’ is held during the holiday season.  For these talented young chess players, playing competitive chess this time of year is just another part of their holiday traditions.

The U.S. Chess Trust is proud to support this event as well as many others.

Last year, the University of Texas at Dallas “UT Dallas” came in first with six points, UMBC came in second with 5 points, and Texas Tech and New York University tied for third with 4.5 points each. The top four finishers in this tournament qualified for the 2012 President’s Cup, the “Final Four of College Chess,” which was held in Herndon, VA earlier this year from March 30–April 1, 2012.

This year, top university chess teams battle it out again. Who will take the top prize?

Team Format:
4 Player Teams, up to 2 Alternates, Traditional 6 round Fix Roster Swiss Tournament. Open to College and University teams from North and South America including the Caribbean. Teams must supply letters from University stating that the players meet eligibility requirements.

Time Control:
Game/90 with a 30 second increment. Notation required throughout the games. Monroi Units may be provided and must be used.

Registration: To register for the tournament either email chess@Princeton.edu or mail to the address below this information: Name of School, Name of Players, USCF ID Number of Players, Rating of Players, and Year of Players (e.g. Freshman, Sophomore, Grad Student, etc.). If sending more than 1 team, please indicate which team each players is on.

USCF Membership can be purchased at this site: http://www.uschess.org/component/option,com_wrapper/Itemid,323/

Coach/Captain must hand in proposed team roster changes one hour before the beginning of the round.

Additional Prizes: Team upset prize per round – $100 per team