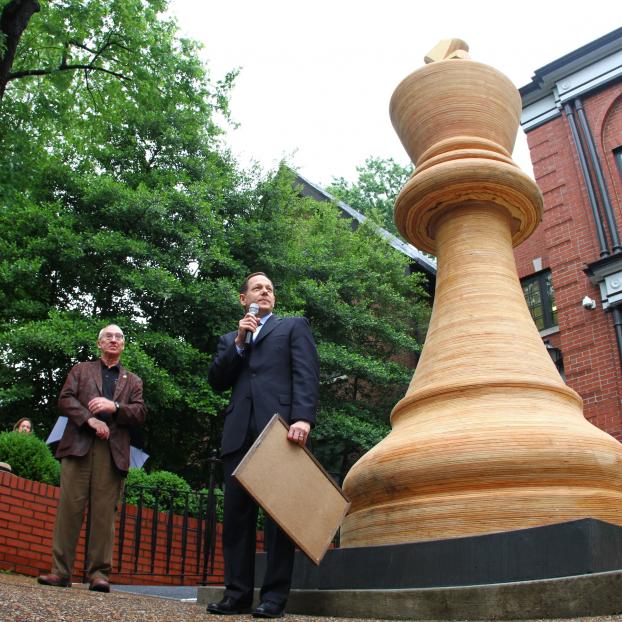 SAINT LOUIS, May 8, 2012 — The 2012 U.S. Chess Championship and U.S. Women’s Championship began in the most serene setting, belying the pressure that will mount over the next two weeks.

The opening ceremony and drawing of lots took place outside the Missouri Botanical Garden on Monday evening. After the players enjoyed a cocktail reception and were introduced, they took turns selecting their random starting assignments. Then they hurriedly boarded the bus back to their hotels to prepare for the first game.

The tournament begins Tuesday, May 8, and concludes Saturday, May 19, with a possible playoff on May 20. The top 12 players in the country will play in an 11-game round robin to decide the title of U.S. Champion. Grandmaster Gata Kamsky will attempt to defend his title and win his third consecutive championship, a feat not accomplished since GM Walter Browne in the 1970s.

The top 10 female players will play a nine-game round robin. Woman Grandmaster and International Master Anna Zatonskih will attempt to repeat. In 2011, using a different format, it took her 19 grueling games to wrap up the victory.

“It represents the best that America has produced,” said Tony Rich, executive director of the Chess Club and Scholastic Center of Saint Louis. The club is hosting its fourth straight U.S. Championship and U.S. Women’s Championship.

Club founder Rex Sinquefield highlighted some other local chess news. Earlier in the day, the Chess Club and the World Chess Hall of Fame, located across the street from the club, unveiled the world’s largest chess piece. The white king, made up of layers of ¾-inch exterior grade plywood, stands more than 14 feet tall, weighs more than 2,200 pounds and is approximately the height of an average female giraffe.

More than 70 students from Saint Louis language Immersion School took a field trip to the Chess Club and Hall of Fame to witness the unveiling of the world record and to tour both facilities. The students got the opportunity to play some of the competitors from the U.S. Championships. Throughout the day, competitors from both events visited area schools to put on simul exhibitions and to speak to students about the benefits of chess.

At the opening ceremony, Sinquefield also explained that local Lindenwood University would begin its chess program in the fall, which will include numerous scholarships for promising players and will be coached by the club’s Grandmaster-in-Residence Ben Finegold. “We will have a lot of grandmasters living in Saint Louis,” Sinquefield said, also referencing the chess team about to begin at Webster University.

In the first round of the U.S. Championship, Varuzhan Akobian will play Yasser Seirawan, Yury Shulman will face Gregory Kaidanov, Alex Stripunsky will play Alexander Onischuk, Alex Lenderman plays Ray Robson, Gata Kamsky goes against Alejandro Ramirez, and top-seeded local Grandmaster Hikaru Nakamura plays Robert Hess. All 12 players are grandmasters, with Robson, 17, the youngest, and Kaidanov, 52, the senior statesman. Ramirez, a native of Costa Rica, is the only player competing in his first U.S. Championship. Robson will begin his college studies at Webster starting this fall.

In the women’s event, play will begin with Viktorija Ni against Tatev Abrahmyan, Iryna Zenyuk against Alisa Melekhina, Irina Krush versus Sabina Foisor, Rusudan Goletiani against Camilla Baginskaite, and Anna Zatonskih facing Alena Katz. Ni and Katz are the two newcomers. Ni’s husband is Shulman and Brooklynite Katz is the only member of either tournament that has yet to graduate high school. She took her SAT exam the day before flying to Saint Louis.

All games will commence at 1 p.m. local time. Spectators can visit the club or watch the action live with commentary at www.uschesschamps.com.