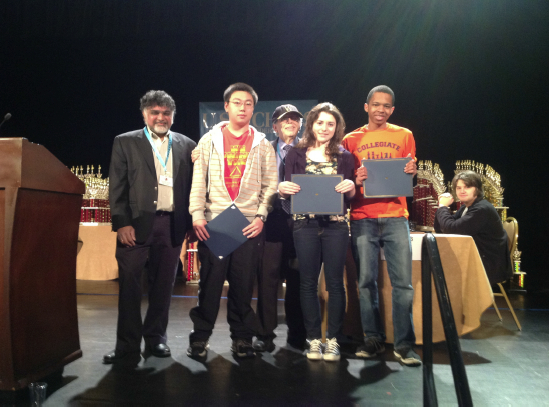 The winners of the 2013 Scholar Chess Player Awards were announced at the Supernationals (Nashville, TN) by Harold Winston, US Chess Trust Chairman, and Sunil Weeramantry, US Chess Trust Scholastic VP.

The 2013 Scholar-Chessplayer Award winners are (in alphabetical order):

Congratulations to the winners for their outstanding achievement!

This year’s students were selected from 15 applicants by a panel of judges appointed by the Scholastic Council of the USCF. In recognizing this year’s winners, Mr. Weeramantry observed the geographical diversity of the recipients and drew attention to the high calibre of all the applicants.

The U.S. Chess Trust is an independent 501(c)(3), non-profit organization.

Created in 1967, the Trust was organized to promote, stimulate and encourage the study and play of the game of chess as a means of intellectual development. The Trust uses its resources for charitable purposes, including social, educational, scientific, historical endeavors. The U.S. Chess Trust takes an active role in supporting chess education programs across the nation. Our Trustees act without compensation, and are dedicated to the U.S. Chess Trust’s mission. Donations to the U.S. Chess Trust are tax-deductible.

The United States Chess Federation (USCF), founded in 1939, serves as the governing body for chess in the United States and is now headquartered in Crossville, Tennessee. USCF is devoted to extending the role of chess in American society. It promotes the study and knowledge of the game of chess, for its own sake as an art and enjoyment, and as a means for the improvement of society. The USCF is a not-for-profit membership organization with over 80,000 members.

For additional information on the USCF see: http://www.uschess.org.

The National Scholastic Chess Foundation (NSCF) is a non-profit foundation organized for educational purposes under section 501(c)(3) of the Internal Revenue Code. The NSCF was created in 1991 as a merger between the Westchester Chess Foundation (founded in 1985) and the Fairfield County Chess Foundation. The Executive Director of the NSCF is FIDE Master Sunil Weeramantry.