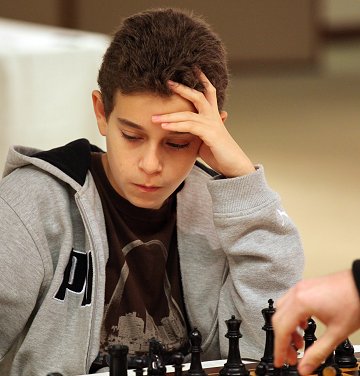 The FRANK P. SAMFORD, JR. CHESS FELLOWSHIP, marking its twenty-eighth annual award, has selected Grandmaster Daniel Naroditsky of Foster City, California, as its 2014 Fellow. The Samford is the richest and most important chess fellowship in the United States. It identifies and assists the best young American chess masters by providing top-level coaching, strong competition and access to study materials. The Fellowship also supplies a monthly stipend for living expenses so that the winners may devote themselves to chess without having financial worries. The total value of the Fellowship has been increased several times over the years and is now $42,000 annually. The prize is awarded for one year and can be renewed for a second year. The winners’ term begins July 1st, 2014.

All in all, it gives these brilliant young American Grandmasters the support and resources necessary to enhance their skills and reach their full potential.

Currently rated 2632 USCF and 2543 FIDE Daniel Naroditsky was awarded the GM title last fall shortly before his 18th birthday. His career highlights include winning the World Under 12 championship in 2007 and the US Junior Closed last summer.

The latter was followed by Grandmaster norms (+2600 FIDE performance) in four consecutive events. Naroditsky has been ranked No. 1 in the U.S. in his age category for the past eight years and is the youngest published chess author in history, having his first book published at age 14.

Since its inception the Fellowship has proven very successful. Many Samford Fellows have become strong Grandmasters, members of the United States Olympiad team and US Champions. America’s top two players, Hikaru Nakamura and Gata Kamsky, are former Samford Fellows.