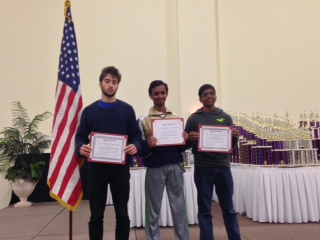 This year, more than 35 eligible candidates applied for the award.  The winners of the 2014 Scholar Chess Player Awards were announced at the High School Nationals.

The 2014 Scholar-Chessplayer Award winners are (in alphabetical order):

This year’s winners are all members of the All-America Chess Team, which was created in 1987 to honor the very best players ages 18 and under. “The team, one of the highest national honors attainable by a young chess player, is selected on the basis of age, rating, and activities during that year, similar to the selection process of “all conference” sports teams.”, according to the USCF.

Arthur Shen has a USCF Rating of 2458 and a FIDE Rating of 2353. In 2011, he tied for 1st Place at the 2011 U.S. Cadet Championship at took home the UMBC Scholarship to the University of Maryland at Baltimore County, a University that took 2nd Place at the 2014 Final Four of College Chess. Arthur also won 1st place in his section at the 2011 North American Youth Chess Championship, a tournament that is coming back to the New York area June 12th, 2014. In 2013, he became a member of the All-America Chess Team.

Atulya Shetty has a USCF Rating of 2414 and a FIDE Rating of 2313. In 2012, Atulya won the Denker Tournament of High School Champions and with it a UTD Scholarship! That year, he also became the US Amateur Team Champion. In 2013, he was the National K-12 Grade Champion. In 2014, he became a member of the 2014 All-America Chess Team.

The U.S. Chess Trust is a proud sponsor of this program and would like to congratulate the winners for their outstanding achievement!

This year’s students were selected from 15 applicants by a panel of judges appointed by the Scholastic Council of the USCF. In recognizing this year’s winners, Mr. Weeramantry observed the geographical diversity of the recipients and drew attention to the high calibre of all the applicants.

The U.S. Chess Trust is an independent 501(c)(3), non-profit organization.

Created in 1967, the Trust was organized to promote, stimulate and encourage the study and play of the game of chess as a means of intellectual development. The Trust uses its resources for charitable purposes, including social, educational, scientific, historical endeavors. The U.S. Chess Trust takes an active role in supporting chess education programs across the nation. Our Trustees act without compensation, and are dedicated to the U.S. Chess Trust’s mission. Donations to the U.S. Chess Trust are tax-deductible.

The United States Chess Federation (USCF), founded in 1939, serves as the governing body for chess in the United States and is now headquartered in Crossville, Tennessee. USCF is devoted to extending the role of chess in American society. It promotes the study and knowledge of the game of chess, for its own sake as an art and enjoyment, and as a means for the improvement of society. The USCF is a not-for-profit membership organization with over 80,000 members.

For additional information on the USCF see: http://www.uschess.org.

The National Scholastic Chess Foundation (NSCF) is a non-profit foundation organized for educational purposes under section 501(c)(3) of the Internal Revenue Code. The NSCF was created in 1991 as a merger between the Westchester Chess Foundation (founded in 1985) and the Fairfield County Chess Foundation. The Executive Director of the NSCF is FIDE Master Sunil Weeramantry.