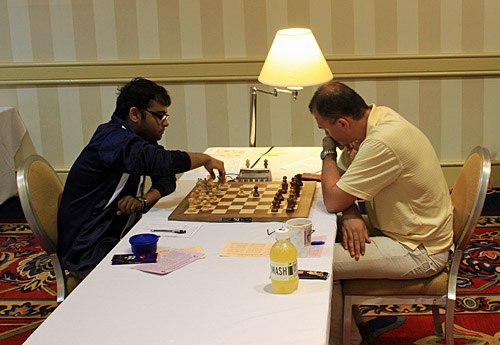 QUOTE FROM OFFICIAL SITE:  http://chesstournamentservices.com/cca/world-open/
“GMs Ivan Sokolov and Alex Shabalov finished at the top of the Open Section standings, both finishing with 7/9 after agreeing to a quick draw in the final round to secure a share of first. Both players could have been caught by GMs Wesley So and Yury Shulman or IM Marc Arnold who all started the final round half-point behind the leaders but none of those players managed a victory, leaving Sokolov and Shabolov alone at the top.

An Armageddon play-off between the two GMs was held after the end of the tournament. Sokolov had the white pieces and 5 minutes while Shabalov had the black pieces, 3 minutes and draw odds (both players also had a 5 second delay). The game was won by Sokolov who becomes the 2012 World Open Champion.

On the norm front, Arnold had already secured his 3rd and final GM norm going into the round after a victory over GM Robert Hess in round 8. Other GM norms were scored by IM Eesha Karavade and FM John Bryant. IM norms were scored by FM Michael Kleinman, FM Thomas Bartell, Yaacov Norowitz and Luke Harmon-Vellotti.”