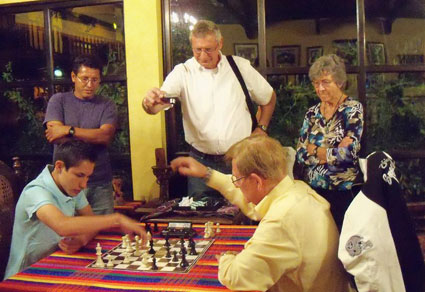 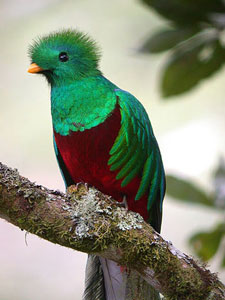 Dewain Barber, founder of the K-8 Barber Championships, held each year in conjunction with the Denker tournament of High School champions and US Open, writes about finding chess on his recent trip to Guatemala.

A bird with iridescent green plumage and red under parts. They are almost entirely found in Western Mexico and Guatemala. The quetzal is the symbol on the Guatemalan flag and the name of the Guatemalan currency. The green tail feathers were used in the headdress worn by Aztec leader, Moctezuma.

So, I guess you may ask, “How is a bird with beautiful plumage related to chess?” During my trip to the many parts of Guatemala I found a game of chess with a young man, Zedrick Rodriguez and his father, Luis, who teaches history and has a chess club in a high school near the beautiful Lake Atitilan, one of the Mayan cultural areas.

One of my goals in life is to play one casual game of chess with a local player in each country I visit. I never know who I will play as the encounter is not planned in advance. I just ask the question in towns, villages and cities: “Do you know anyone who plays chess locally?” The reply is mixed. Some of the places I have been fortunate to have played in are Peru, China, Costa Rica, Germany, Vietnam and Egypt.

In the case of Guatemala, I was fortunate that Oscar, our tour guide, who had twenty-three years of experience in guiding groups through his native land was successful. Initially when I spoke to him, he indicated that he would contact Hotel Atitilan where he remembered seeing a large outdoor chess set. As it turned out, after we visited the pyramids of Tikal and the beautiful old city of Antigua, we arrived at the most beautiful lake in the entire country. It was situated near three dormant volcanos that provided a backdrop for the chess activity.

I arranged with Oscar and the hotel to provide seating for those of our tour group who would like to see a chess game and learn a little about the game. It was a memorable encounter.

I decided to show chess in its most rapid form with three games of blitz, one with the father and two with the son who was the local champion of the area. I found out later that neither one had ever played outside their area and had never played a foreigner. Oscar spoke in Spanish, and then in English introducing my two opponents. I then presented a gift to the family of a large, padded, folding magnetic set and thanked them for being a part of this chess exhibition.

I found out quickly that my blitz game had not improved with age. I arranged these games to share with everyone my love of this game. Whether I am in Kenya (Swahili), Guatemala (Spanish) or Cambodia (Khmer) it is not the English language I speak that is important, but the international language we call chess. It is spoken everywhere and brings people and cultures together. The World Youth and the Olympiad are just a few examples of this one world view.

I know at this point you are asking the question, “How did I do in the games?” Well, I won one and lost two which to me is not as important as the sharing that was the highlight of the evening.

Find out more about the K-8 Barber Championships (July 27-30, Madison WI), scheduled each year in conjunction with the Denker tournament of High School champions alongside the US Open.