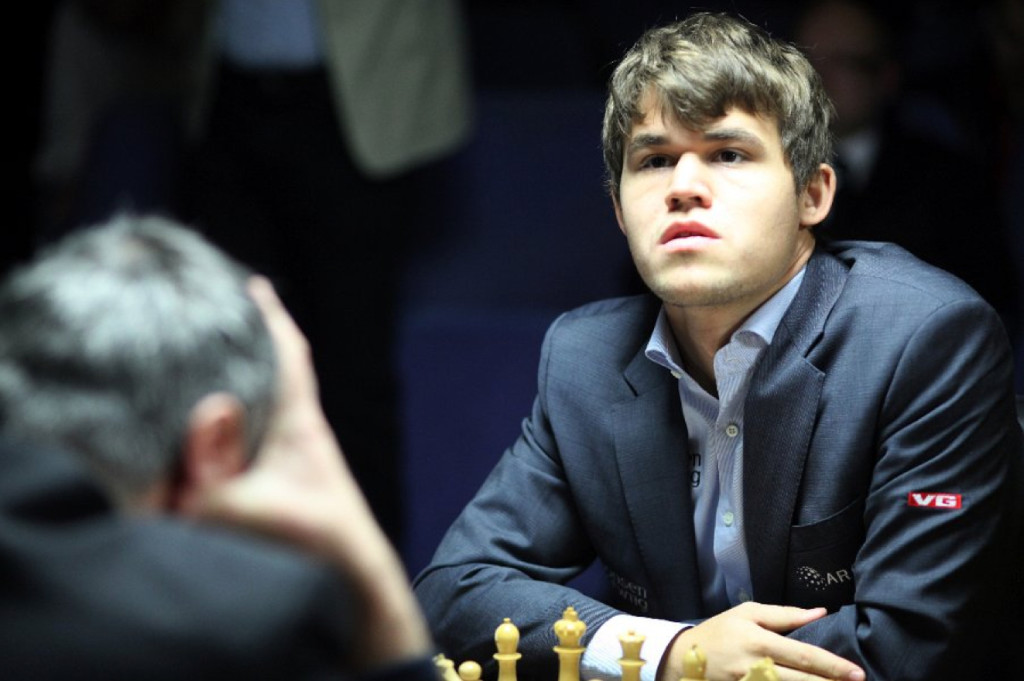 Magnus Carlsen won the FIDE Candidates’ Tournament in London on Monday after a bizarre finish of what has become a historic event for chess. Both the Norwegian and the other leader, Vladimir Kramnik of Russia, unexpectedly lost their game in the final round, and so they remained tied for first place and Carlsen won on the second tie-break rule: higher number of wins. This means that in the next title match, World Champion Viswanathan Anand will face Carlsen. On the last day Levon Aronian of Armenia beat Teimour Radjabov of Azerbaijan while Boris Gelfand of Israel and Alexander Grischuk of Russia drew their game.

A Hollywood blockbuster couldn’t have had a more dramatic scenario with the hero of the story going down just before the end, only to emerge as the winner after all. This is what happened in rounds 12-13 with Carlsen losing his lead to Kramnik on Friday and then recovering on Sunday, and it also happened in a thrilling final round. The Norwegian unexpectedly lost his white game against Peter Svidler (REPLAY THE GAME BELOW), but because Vladimir Kramnik also went down against Vassily Ivanchuk (REPLAY GAME BELOW), Carlsen won the tournament anyway. It was quite a fitting scenario for April 1st, except that this is what really happened!

The day started quietly with a draw between Boris Gelfand and Alexander Grischuk. Facing the Grünfeld, which he included in his own repertoire last year against Anand, Gelfand tried the 5.Bd2 variation. Grischuk was “surprised by 11.Bc4” but reacted well and about the position after 17.f4 he said: “White at maximum can get a very slight advantage but Black can get a winning position if something goes wrong for White.” Already with 18…b4 Black “more or less forced the draw”, according to the Russian. Joining the live commentary, Grischuk said: “I’m quite happy to finish my game early so that I can enjoy this!”

Then, the game between Levon Aronian and Teimour Radjabov finished in favour of the Armenian. “In general after the opening I got a big advantage and it was very difficult to play for Black,” said Aronian. Radjabov, who finally went for a proper King’s Indian – the defence with which he has had so many successes – managed to trap the white queen in the early middle game, but Aronian got two rooks for it and combined with the presence of opposite coloured bishops, his attack on the king was just too strong.

But, of course this last round was all about the other two games: Vassily Ivanchuk versus Vladimir Kramnik and Magnus Carlsen versus Peter Svidler. Because Carlsen was leading on tie-break, Kramnik basically had to outperform him in the final round to emerge as the winner: he needed a win if Carlsen drew, or a draw if Carlsen lost. It all went quite differently. Kramnik, playing black, got under serious pressure right out of the opening, while Carlsen didn’t get much of an opening advantage playing white.

To keep all options open, Kramnik played the Pirc Defence, and Ivanchuk responded with simple, healthy developing moves. However, the Ukrainian (again!) needed quite some time to make his moves in this game, so even though he was building up an advantage, the Carlsen fans weren’t sure at all about the situation. Would Ivanchuk lose on time again…?

Meanwhile, Carlsen himself was using lots of time himself – too much time. After making his 27th move, the Norwegian had only 5 minutes left for 13 moves, and 2 moves later his clock was down to 1 minute and 20 seconds. It was a situation Carlsen hadn’t been in before in all previous rounds! It must have been around this time that the home page of Norway’s biggest newspaper online, vg.no, crashed (like several chess servers) due too the high number of visitors trying to follow the games.

Carlsen only barely made the time control – he made his last three moves in about nine seconds, knocking over some pieces in the process and losing precious seconds there. After the dust had cleared, he found himself in a completely lost ending Svidler had simply played an excellent game, while Carlsen had succumbed under the pressure and the tension. “I was trying to equalize and then Magnus perhaps overestimated his position,” said Svidler. “I was spending too much time in the middle game on reasonably good moves but also on not too difficult moves. (…) I definitely overestimated my position. Additionally, I just couldn’t calculate very well today and then you have to spend a lot of time, that’s the way it is. Obviously not as much time as I did, because it became a serious liability at the end, but it’s not easy. From early on there were lots of things to calculate on every move,” said Carlsen at the press conference, while Ivanchuk and Kramnik were still playing.

Before leaving the press room, Carlsen asked whether he could get the position of that last game on the laptop that was available. By that time Ivanchuk had made the time control, and he had a winning position. Carlsen said: “I think this cannot possibly go wrong,” and right at that moment Kramnik resigned his game, and with it his fight for first place. Carlsen was congratulated by his manager and by Svidler, and immediately gave a few interviews to mostly Norwegian press.

Meanwhile, Ivanchuk and Kramnik arrived in the press room to comment on their game. “I had to play for a win, to burn bridges in a way, because of course I didn’t think that Magnus was going to lose. I thought I got what I wanted at some point. It was an interesting position but terribly complicated. Somewhere around 20…Nhf4 I liked my position and then somehow I lost a bit of concentration because I didn’t know what to do,” said Kramnik, who also kept an eye on the other game.

“The problem was that Peter [Svidler]’s position was already promising but not yet so clear so I didn’t know what to do, whether to play for a draw… Somehow I got a bit lost between watching that game and trying to understand what I should do. Then I made a few awful decisions and I was unlucky that I had to make a tough decision on move 40, not 41.” In time trouble the Russian missed an important tactic, and then his position was lost. Ivanchuk agreed that the position was at some point drawish. “But I noticed that my opponent started to play a bit risky and he gave me chances.”

Carlsen then returned to the press room to answer questions in his new status as tournament winner. He said: “I never expected to lose and I didn’t really have any expectations for the other game. That didn’t make sense to me since I couldn’t do anything about it. (…) I didn’t really want to resign before I was sure that Ivanchuk would win!”

The tournament winner felt that until the 11th round he “played the best chess for sure”. “At the end everyone got tired, the quality got lower and anything could happen. But overall I think I did pretty well and I deserve to win.” Carlsen said he was “very impressed” by Kramnik’s comeback in the second half of the tournament. About his match against Anand, he said: “I think it’s going to be very interesting, a great event but it’s a long time ahead so we’ll see what happens.”

The FIDE Candidates’ Tournament took place March 14th-April 1st, 2013 at IET London, Savoy Place. It was sponsored by the State Oil Company of Azerbaijan Republic (SOCAR) and organized by AGON and the World Chess Federation (FIDE). Games and information can be found at http://london2013.fide.com.

The closing ceremony will take place at 6 p.m. 11 Downing street.