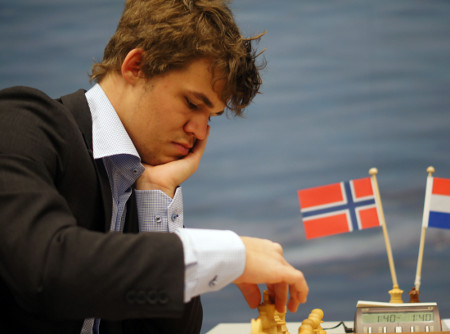 Are draws boring?  The answer is that it depends.  Draws can be boring, as can wins and losses.  Draws can also be very exciting.  Highly accurate play may lead to a draw, but still be very entertaining and instructive.  There are also those games that end in a draw, but one player seems to be winning throughout, and without making any obvious error, encounters determined defense that ends up in an unwinnable outcome.  Some of those types of games are edge-of-your-seat exciting.

The question comes up after reviewing some of the commentary following the most recent World Champion Match between Carlsen and Caruana.  The standard time control match ended in all 12 games being drawn.  Both players had winning chances, but both players defended extremely well, and neither could notch a win.  Carlsen retained his title after dominating the rapid play tie-breaker.

Then came the Internet chants of, Boring!  I did not find it boring at all, but I do agree that it was unsatisfactory to ultimately decide the match with rapid chess. I do agree with those that think it would’ve been better to have a 16 games match with the Champion retaining the title in case of an indecisive result.  Longer matches become increasingly expensive to organize. Commentators, who have never organized GM tournaments, often overlook this last consideration.

Since I thought so much Internet commentary was shallow, and uniformed, I thought it might just be me.  So, I contacted three titled players I know and respect, and who’s opinion I value.  IM Elliot Winslow thought the match was characterized by accurate play.  That it contained interesting moves and ideas.  He thought the quality of play was extremely high, and the object was to win the match not to entertain spectators.  GM Nick de Firmian thought the classical time control games were conservative, but that the rapid games were exciting.   He said that, if Magnus had won game one, the match might have gone differently.  He thought that perhaps the match needed to be 16 games rather than 12.  He thought some games were great and that the second half got more intense.  He also considered the two players clearly established that they were the best in the world.

GM John Fedorowicz thought that the object of the match was to win it.  That’s it.  He thought it was a normal match between two high level GMs.  The fact that it ended with 12 draws would probably produce ridiculous idea about how to reorganize it.  He didn’t think extending it to 16 games would make any real difference.  He repeated that the games were normal games with both players trying to win the match.