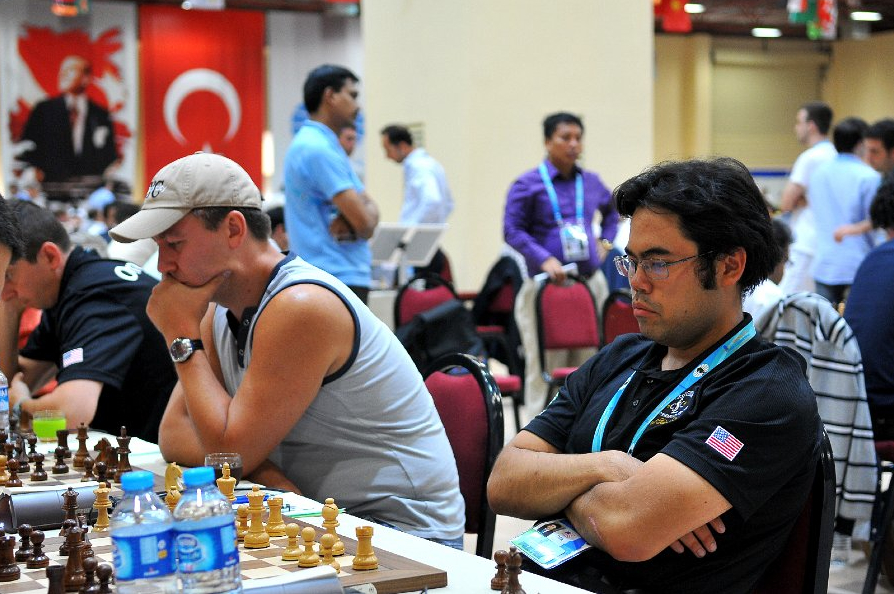 After taking a short break with the previous round, the team of Russia has returned to the winning paths in the 7th round of the Chess Olympiad Open section.

Russia and Azerbaijan signed three draws before the time control, but Alexander Grischuk remained in the seat and kept pressing against Eltaj Safarli. Sasha eventually converted the extra pawn into full point, bringing a 2,5-1,5 victory to Russia and redeeming himself for the yesterday’s setback in the match against Armenia.

Armenia had another tough match, this time against China on table two. Sergei Movsesian, who yesterday saved his team in the clash with Russia, fell victim to Wang Yue’s counterattack. With the other three games being drawn, China celebrated an important victory that leaves them on the shared 2nd place, right behind Russia.

Live games with analysis / Videos from round 7

The defending champions from Ukraine have made a huge leap ahead by defeating Spain. Vassily Ivanchuk’s win on the first board was the only decided game in the match. Ukraine will play Russia in the next round.

The Philippines, seeded only 35th in the starting list, bravely resisted the 4th-seed Hungary to go home with a 2-2 tie. Wesley So and Peter Leko played a wild line of the Marshall Attack, but the game ended in a draw.

Zoltan Almasi took his team into the lead with a win against Oliver Barbosa, but the legendary Eugenio Torre, first Asian Grandmaster and record holder with 21 appearances in the Olympiads, escaped from a passive position to pull a victory against Ferenc Berkes and equalise the score.

Germany edged Moldova 2,5-1,5 and England outplayed Georgia in the same manner. USA won against the young Turkish team by 3,5-0,5. Argentina and India, as well as Israel and France, traded a couple of defeats for each team to split the points in their respective matches.

The spectators of the Women section have witnessed the most exciting match from the beginning of the Olympiad. Russia and Poland were paired on the top table. All four games continued well into the 5th hour and the defending champions were on the brink of defeat.

Nadezhda Kosintseva’s King was running for its life, but Iweta Rajlich couldn’t make a decisive punch and finish the game. The Queens’ endgame was drawn.

The position in Karina Szczepkowska – Natalija Pogonina was roughly equal, but after the 2nd time control Szczepkowska suddenly panicked and gave up the exchange. Russian champion Pogonina duly converted the advantage.

Around the same time Jolanta Zawadzka defeated Alexandra Kosteniuk to even the score. European champion Valentina Gunina and Monika Socko continued to play their Rook endgame for about 50 moves until it finally became obvious that black can’t win. A gigantic battle that ended in a 2-2 tie.

China beat the eternal rivals from Georgia by 2,5-1,5 thanks to the victories on the lower two boards. Ukraine and France signed four draws, while the match Serbia – Vietnam was also tied, but only after the opponents exchanged a pair of victories for each team.

Hungary somehow broke the resistance of the young team from Montenegro, while India soundly beat Estonia by 3-1. Spain edged Greece and is now in the group of teams on the shared 4th place.