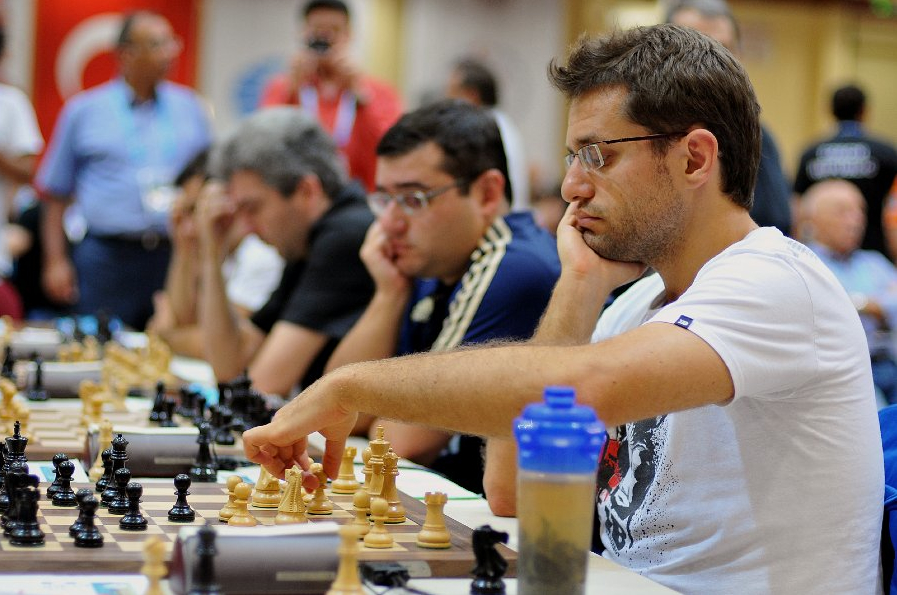 Russia made a huge step in their quest for the first gold medal since 2002 as they beat the defending champion and one of the main rivals – the team of Ukraine.

Sergey Karjakin woke up in the perfect moment to outplay his former team-mate Andrei Volokitin and earn the key victory for Russia. The two games in which the Ukrainians played white pieces were balanced and eventually drawn.

But Vassily Ivanchuk earned a pawn against Vladimir Kramnik and kept attempting to win in order to even the score. Kramnik’s task was made easier by the fact that all pawns were grouped only on the King’s flank. Former World Champion provided a much needed draw for the final 2,5-1,5 victory in favour of Russia.

China took an early lead against Azerbaijan as Ding Liren beat Rauf Mamedov without much trouble. But Shakhriyar Mamedyarov struck back by winning brilliantly against Wang Yue. With the other two boards being drawn, the teams have split the points, 2-2.

Live games with analysis / Round 8 video

Armenia walked past Uzbekistan with 3-1, while USA took advantage of another easy pairing to rest Hikaru Nakamura and defeat FYROM 3-1. In the next round USA is matched against Russia on the top table.

Elo doesn’t really play a game in chess, as repeatedly proven by Philippines. The 35th-seed soundly beat the strong team of England by 3-1. Oliver Barbosa on the 2nd and legendary Eugenio Torre on the 3rd board defeated their respective opponents.

Germany and France have scored narrow victories against Hungary and Cuba respectively. India escaped the defeat as GN Gopal evened the score against Serbia with a win against Dusan Popovic. Earlier Ivan Ivanisevic beat Krishnan Sasikiran.

Yesterday Poland bravely fought the defending champions from Russia but in the 8th round of the Women section of the World Chess Olympiad the top seeded China proved to be too strong.

With another victory from the World Champion Hou Yifan and the second board playing with renewed spirit, China soundly defeated their opponents with 3-1.

Russia was engaged in another epic battle, this time against their neighbors from Ukraine. Anna Ushenina imposed the first defeat to the reigning Russian champion Natalija Pogonina. Next game to finish was the draw between Mariya Muzychuk and Valentina Gunina.

In the last move before the time control Natalia Zhukova missed a tactical shot that would have brought her substantial advantage. Instead, Nadezhda Kosintseva continued to gradually improve her position and then a neat trading sequence secured her a winning Queens’ endgame.

As for the top board, it is sufficient to say that a draw was signed after 157(!) moves! A stubborn defence from Kateryna Lahno finally worn Tatiana Kosintseva down and the Russian player conceded a draw after holding a huge advantage for most of the game. The match ended in a 2-2 tie.

France defeated their neighbors from Spain with 3-1 to schedule a clash with the powerful China in the next round. India beat Vietnam 2,5-1,5 to make a big leap to the shared 2nd place.

The 35th-seed Uzbekistan is also sharing the 2nd place, but this shouldn’t be a surprise anymore. The talented and underrated team beat Hungary, after scoring against USA in one of the previous rounds.