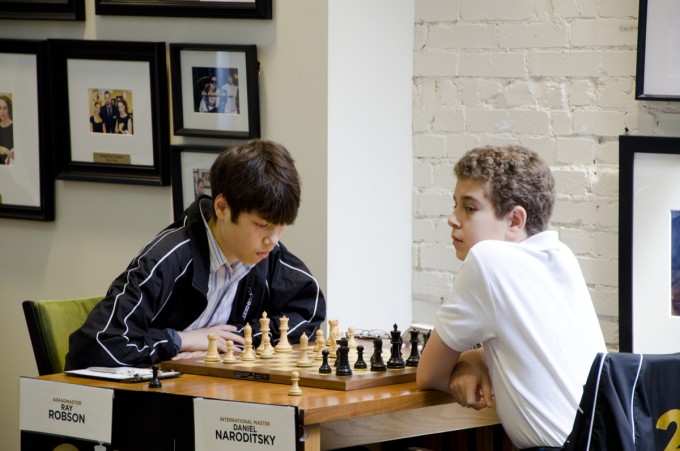 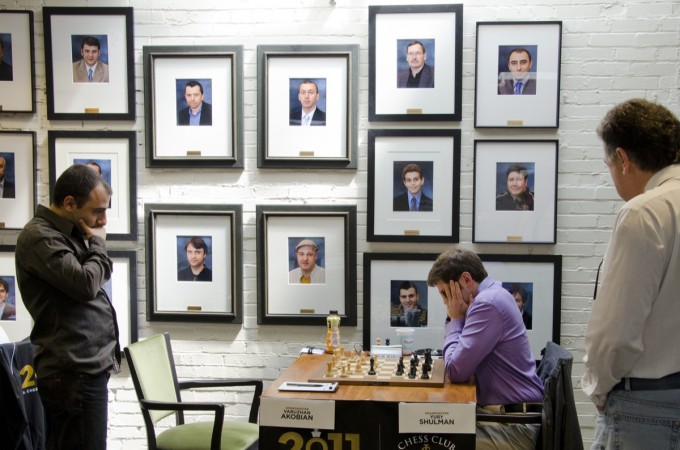 Round five of the U.S. Championship produced the most fighting chess so far at the 2011 U.S. Championship and U.S. Women’s Championship. Players of the Black pieces won an astounding six games, and half of the games went into the sixth hour. Three-fourths of the games ended with a winner, and even the defending champion could not get an easy day off.

GM Robert Hess stretched his lead by getting a chess “turkey.” He won his third game in a row to move to four points, the most of any player in the U.S. Championship. The young grandmaster chose an opening against GM Gregory Kaidanov with low risk where his pawn majority could be pressed. “I got exactly what I wanted with three against two on the queenside,” Hess said. “It’s annoying to play for Black.” Hess said he had great respect for his veteran opponent, and referencing his opponent’s nickname, Hess said, “I wasn’t going to play something risky against Grisha.”

GM Sam Shankland, tied with Hess in Group B going into the round, did not attain such a stable position. He entered the preparation of GM Alexander Shabalov, and for 14 moves his opponent played automatically. After accepting an exchange sacrifice, Shankland found his pieces tied down and his supposed material advantage illusory. “None of my rooks ever did anything,” Shankland said. Talking to Shabalov after the game, Shankland said, “You beat me like four games in a row with Black. It’s not fair.” Shabalov replied, “I would still trade places with you.” Shankland stays with three points, while Shabalov’s win got him to two out of five. Shabalov is still mathematically alive to finish in the top two of his group, if only barely. When asked what he has left to play for, Shabalov joked, “There’s always money!” Each place difference for the non-qualifiers is about $1,000 difference.

GM Larry Christiansen entered the round in sole possession of third place in the group, but he yielded that placement to GM Alex Onischuk after losing their head-to-head battle. “I didn’t get so much from the opening even though I knew the line,” Onischuk said. Though the win puts him in third place for the time being, Onischuk was quick to explain that he has to work in the last two rounds. “Still it’s not clear if I’m going to qualify,” he said. Going into the tournament, Onischuk was a heavy favorite to be a qualifier to the semifinals.

In other Group B action, GM Yasser Seirawaran recovered from a slow start to win his first game of the event by besting GM Ben Finegold after the latter willingly entered a complicated but losing king-and-pawn endgame. Finegold felt frustrated after the game. While he resigned in a losing position, he said that the variation Seirawan prepared to continue with was not the best and would have led to a draw. 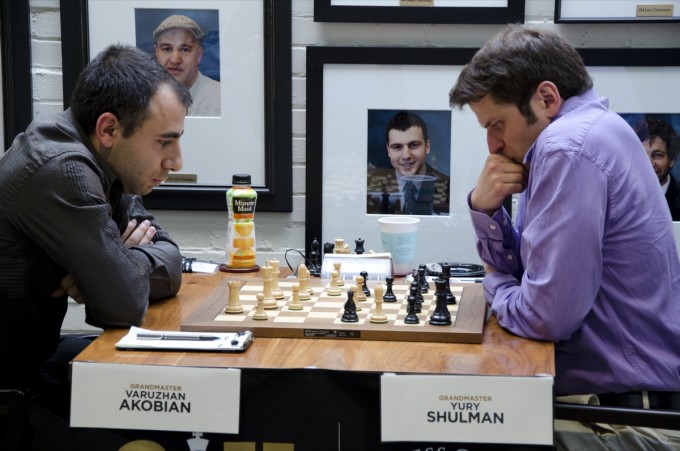 In Group A, both GM Yury Shulman and GM Gata Kamsky protected their lead by negotiating draws. Shulman’s draw versus good friend GM Varuzhan Akobian came without too much fuss, but Kamsky had to work for quite some time against GM Alexander Stripunksy. Kamsky closed the entire position by locking up the pawns but a determined Stripunsky fought hard to open an avenue for attack. After exhausting all resources, Stripunsky settled for a split point. Kamsky was highly critical of his own play, but both he and Shulman remain in the drivers’ seats with 3.5 out of five.

GM Ray Robson failed to catch up as his knight got ensnared on the a-file against 15-year-old IM Daniel Naroditsky. Robson extricated his knight, but at great cost, and his younger opponent eventually barreled down the edge of the board to win the game. “He defended like a tiger,” Naroditsky said. “He was down to five seconds each move but he found the best move each time.” Both Naroditsky and Robson now sit at 2.5. The even score is outstanding for the former but represents a missed opportunity for the latter. 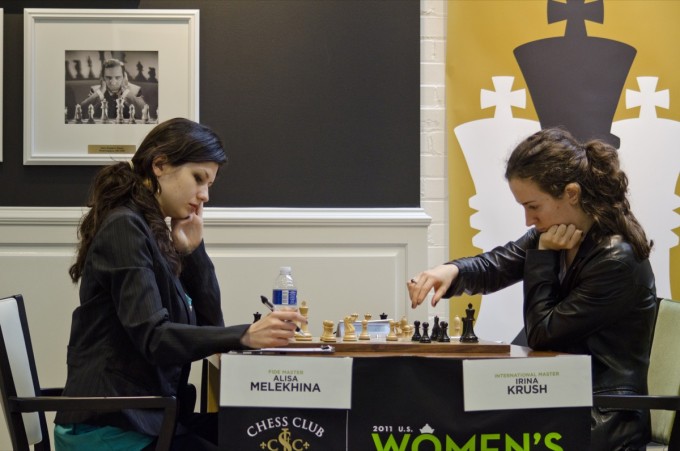 In the U.S. Women’s Championship, IM Irina Krush moved into sole possession of the lead for the first time in the tournament by winning her fourth game in a row. Krush outmaneuvered FM Alisa Melekhina in an equal ending to get to four points. Melekhina insisted she is playing well but is not finding any luck in her games.
Early tournament leader WGM Sabina Foisor suffered her first hiccup of the event. She lost to IM Rusudan Goletiani, but Foisor remains tied for second place with two rounds to go.

Equaling Foisor with 3.5 out of five is WFM Tatev Abrahamyan, who won for the first time ever against IM Anna Zatonskih. Despite having an extra queen, bishop, and pawn about to promote, Abrahamyan almost threw away the win. “I finally play one good game and I can’t finish it well!” she said. After her king took a long walk to the other side of the board, Abrahmyan found shelter and netted the point. Zatonskih will need to move quickly in rounds six and seven to qualify for the semifinals.

WGM Camilla Baginskaite won her third game to continue to come back from an opening-round loss. Her victory over WIM Irina Zenyuk moved her to 3.5 and with a great chance to qualify.

The top four women are Krush with 4/5 and then Foisor, Abrahamyan and Baginskaite with 3.5/5.

In round six, the young Naroditsky will face defending champion Kamsky. Asked what his strategy was, Naroditsky joked that he would be “groveling,” a term chess players use to mean they are hoping for a draw. Christiansen will be desperate against Hess, and Shulman will try to keep place against Robson.

The top four women need to do little more than to play for draws, so Zatonskih will need to find a way to win as Black against Goletiani.