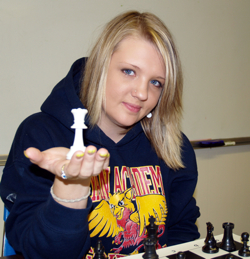 I am a slow learner. It took me the last 43 years to figure out what I was put on Earth to do with all my oddball qualities, unique experiences and quirky insights. I found my calling via a phone call from the blue asking me to teach high school English this Fall.

Having lived aboard a sailboat at one time provided two good teaching mantras: “Sometimes you have to go left to go right” and “You cannot control the wind, only adjust your sails.”

In I sailed with lesson plans on Beowulf, Chaucer, creative writing prompts galore. I ran straight into the rocky classroom where students lights had been burned out by: ADD, ADHD, dyslexia, lack of self-esteem, rampant hormones and Senioritis.

It was time to go left to set things right. Out came my iPod filled with everything from Shakespearean sonnets read by a New York convict in a “Sensitivity through poetry” program to the Lord’s Prayer read in Olde English.

The breakthrough tool, however, was the game of chess. Chess is not a game for “smart people” but a game that enhances people’s smarts. (Please see http://www.quadcitychess.com/benefits_of_chess.html)

It began when I decided to use the game of chess as a way to teach the literature of the Middle Ages and Eleanor of Aquitaine. The thought came into play as I poured over my lesson plans while my husband, Robert, sat playing chess against our four-year-old son, Quin. I thought about how chess is a story that is rewritten with every game. The queen, like Eleanor, is the most powerful piece in the kingdom. Chess could provide fodder for teaching metaphor, allegory and perhaps be a good shield allowing students to explore their emotions without experiencing too much pain.

I went into the classroom with three boards, a set of descriptions of each piece as a character (knight, king, queen, bishop, pawn/soldier, castle/rook) and a very crazy teaching plan.

Students in all my classes would learn to play. No excuses.

Results were immediate and dramatic. My discipline problems pretty much evaporated. Students with ADD, ADHD, dyslexia were transformed into chess-a-holics. Those who previously were labeled by themselves and others as least likely to succeed were suddenly winners.

Since we had nearly 40 players we formed the school’s first chess club. I applied to the U.S. Chess Trust in Walkill, NY and the Virginia Scholastic Chess Association in Richmond for aid in the form of more chess boards.

U.S. Chess Trust is a 501c3 charitiy in need of funds so that other schools here in Hampton Roads and across the nation can help public and private schools obtain equipment to form their first chess clubs as we have.

The timetable was:two weeks of learning/playing chess in class mixed with discussion, articles from the Hip-hop Chess Federation which teaches chess for life strategies, video (i.e. Searching for Bobby Fischer, A Lion in Winter and YouTube snippets of speed chess), and lectures from a book called “Birth of the Chess Queen” by Marilyn Yalom.

Then I set them all to the task of writing Chessays (chess essays): “How is chess like life?”

Those essays are piled beside me as I write and from them shines a light so bright it brings tears to my eyes. They told of battles, death of a parent “King”“Queen,” or longing and newly tapped potential.

“I am a pawn in the board of life. My power is limited. A lot of times people see me as the weakest piece, but what they don’t know is someday I will be the strongest. Pieces, known as my family and friends, fall around me but the only thing I can do is move forward,” wrote one 16-year-old. “Like a Raisin in the sun, my dream was deferred. My King had fallen. It felt like the game was over…”

An 18-year-old girl wrote, “Life is not an easy game to play…There is not one smile that is permanent. Love comes and goes. Heartache is a deleterious emotion that can make our ways of thinking very destructive. This is our battle.”

“Chess is like a relationship. You not only have to take pieces, but you must give them also,” wrote a tattoo sportin’, tough talkin’, fist bumpin’ 18-year-old chess wizard.

“Sometimes you have to give up pieces of yourself to get a piece of value from the other person because you have to sacrifice to attain greatness in the long run. And if you play it safe for too long the relationship will turn on you, as will the game of chess. Then before you know it – checkmate.”