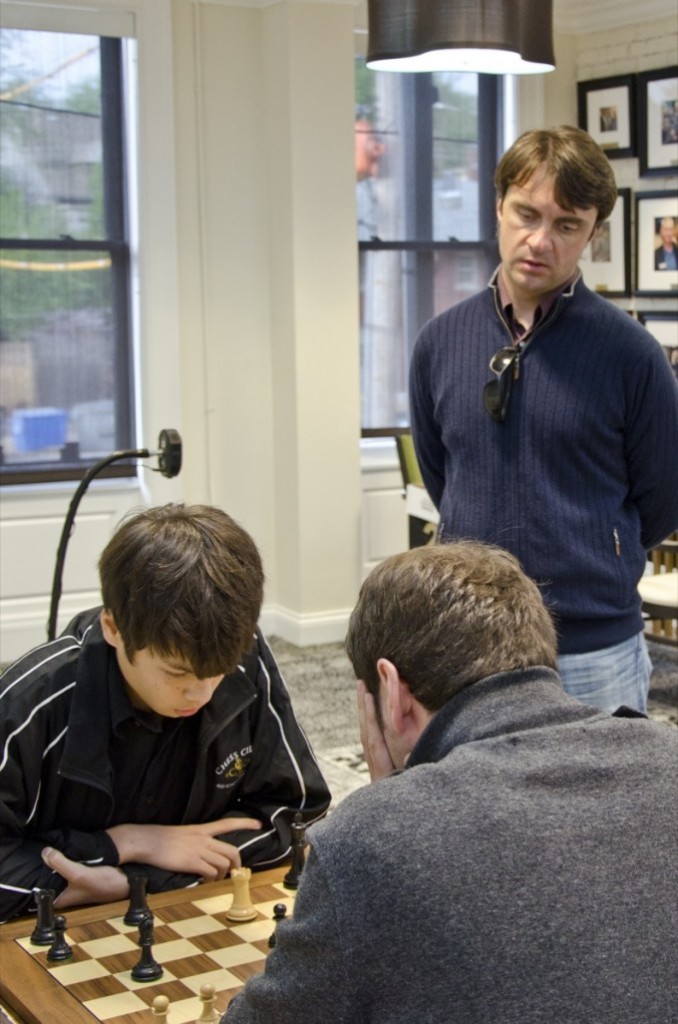 GM Robert Hess and IM Irina Krush kept up their winning streaks in round six of the U.S. Championship and U.S. Women’s Championship, respectively. In the penultimate round of preliminary play, Hess won his fourth game in a row and Krush her fifth. They have both become the first two players to automatically qualify for the semifinals in each tournament. The events are taking place from April 14-28 at the Chess Club and Scholastic Center of Saint Louis. 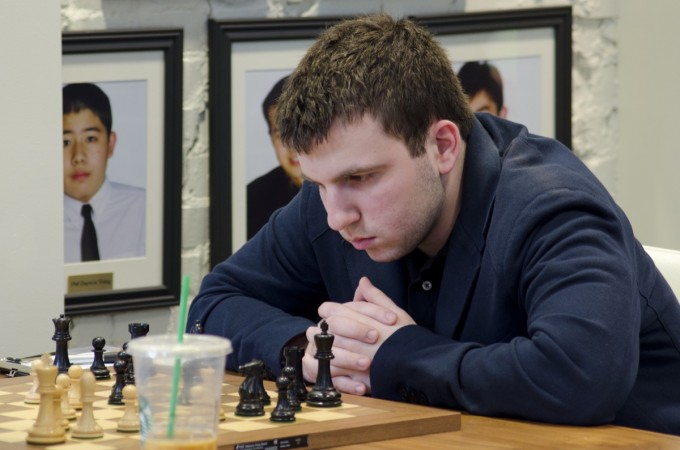 As in round five, Hess tried to play solidly again out of the opening. He accepted GM Larry Christiansen’s pawn sacrifice, after which he said he was “extremely satisfied” with his position. Christiansen had to play aggressively, as he began the round on the outside looking in at qualification. Hess said he is not overjoyed at his play, but “thankfully my opponents have been making mistakes as well. Fortunately I’m here with five out of six so I can laugh at my mistakes.” He added that winning four games in a row may be a rarity at the U.S. Championship but it was not as important as winning the title itself. He has already clinched sole first place in the group and with it a $2,000 bonus. Since scores are erased when the semifinals begin, his game against GM Yasser Seirawan tomorrow will only really matter for his opponent.

In the U.S. Women’s Championship, second-ranked IM Irina Krush, the defending champion, continued her domination of the field by posting her fifth win in a row after suffering an opening-round upset. In round six she took out WIM Iryna Zenyuk to become the first woman to qualify for the semifinals. 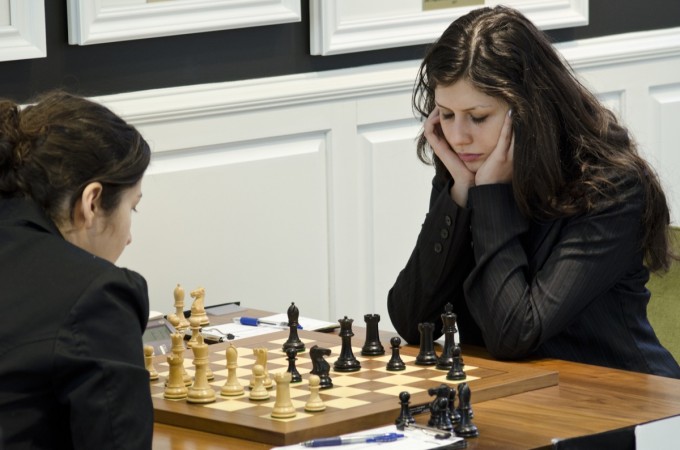 Krush is trailed by a cavalcade of players with four points. WGM Sabina Foiser and WGM Camilla Baginskaite had the quickest draw of the tournament to cement their placements. WFM Tatev Abrahamyan drew FM Alisa Melekhina in a wild affair to equal them. “My games have been so bad,” a relieved Abrahamyan said. 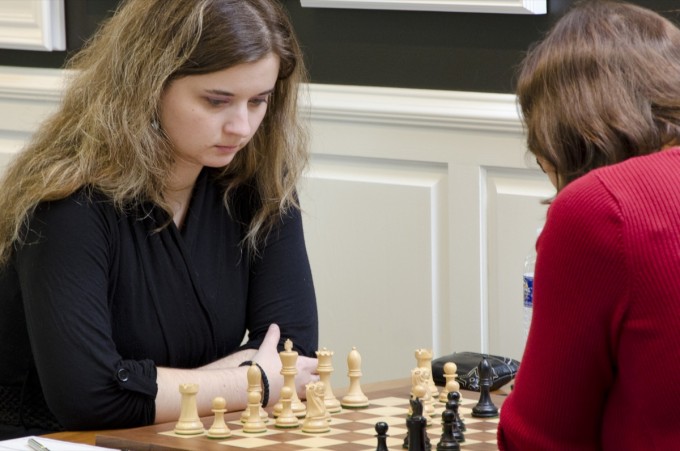 Foisor, Baginskaite and Abrahmyan would have all earned certain qualification were it not for the timely win by top-seeded IM Anna Zatonskih, who partially bounced back with a win as Black to get to three points. 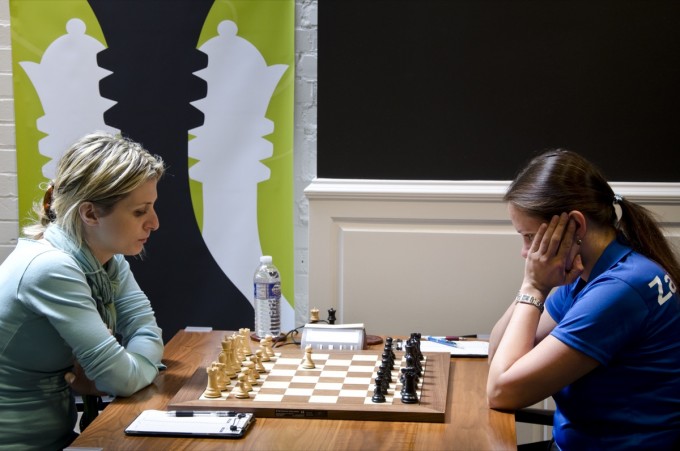 The scenarios in the women’s event for round seven are either simple or complicated, depending on Zatonskih’s game. She will play Foisor tomorrow needing a win. If she loses or draws, then Foisor, Abrahmyan and Baginskaite all join Krush in the semifinals. If Zatonskih wins, she will tie Foisor and perhaps the other two women, depending on their results. The tiebreak procedures vary depending on the number of women and the number of semifinal openings, but suffice to say they are complicated and every woman involved asked to have them explained by assistant arbiter Tony Rich after round six.

With Hess already in, the remainder of the pack in his group tried to keep up. GM-elect Sam Shankland rebounded after a round five loss by drawing local GM Ben Finegold. Their game was one of the few in the tournament to be settled with imbalances everywhere. “I’m really disappointed with my game today,” Shankland said. “Ben sacrificed a pawn for what I thought was insignificant compensation.” Asked why he agreed to the draw, Shankland said there was too much risk in the position. “I’m either going to get mated or run my pawns through. I saw that Alex (Onischuk) had a bad position. But I don’t like losing a White against the lowest player in the competition.”

Shankland was looking over his shoulder at GM Onischuk to make sure he would not be passed in the standings. Onischuk went on to draw his game, the longest of the round, to remain tied with Shankland. The pair are the only players in the group with 3.5/6 and they are slated to play tomorrow (Onischuk has White). Should the game be decisive, the winner will join Hess in advancing past group play. If they draw, they will play again on Friday in a playoff. They could also be joined by Seirawan in that scenario, who would need to win as Black versus Hess to enter the picture. 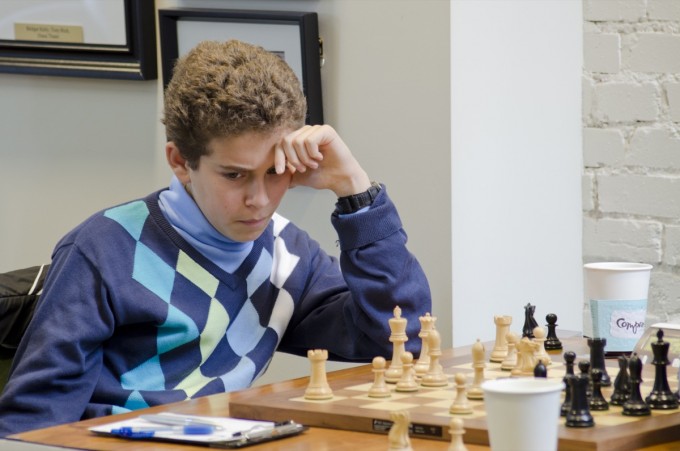 In the other U.S. Championship group, defending champion GM Gata Kamsky outplayed IM Daniel Naroditsky from an equal position. By trading queens early, Kamsky said his teenage opponent made his first psychological mistake. “It showed me he was playing for a draw,” Kamsky said. “He was probably giving me too much respect.” The win puts Kamsky at 4.5/6 and a half-point edge over second place GM Yury Shulman, who has quietly kept up with the leader. 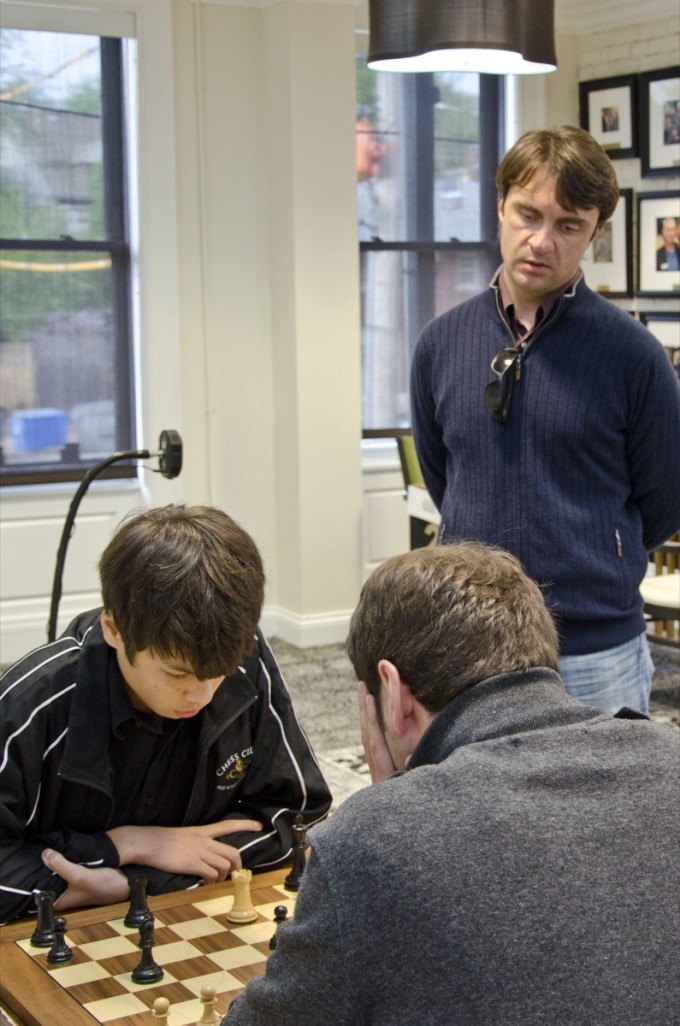 Shulman tried everything he could to beat GM Ray Robson, at one point eschewing several chances to repeat the position. Eventually the attack petered out and Shulman agreed to terms with his opponent when his rook and three pawns could not overcome Robson’s rook and bishop.

Round seven will also be intriguing for this group as Kamsky and Shulman, the two highest seeds in the group, are paired. Conventional wisdom suggests Kamsky will be content with a draw to ensure first place in the group. If so, Shulman would be guaranteed no worse than a playoff for the second qualification spot. He would only enter the tiebreaker match if GM Alexander Ivanov could somehow beat GM Ray Robson as Black.

All other players in the U.S. Championship have been officially eliminated from title contention, but each difference in final placement means $1,000 of prize money, so there is still much left to play for.

To follow the dramatic round seven and to hear grandmaster commentary from GM Maurice Ashley and WGM Jennifer Shahade, log on to www.uschesschamps.com at 2 p.m. local, 3 p.m. Eastern on Thursday.