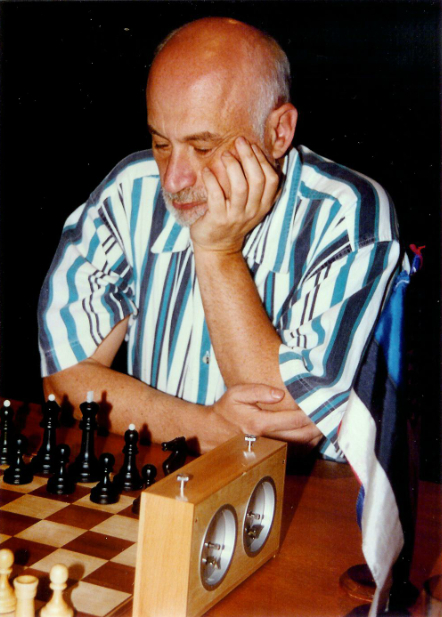 The following interview was prepared by U.S. Chess Trust Trustee, FIDE Vice President and Former US Chess Federation President, WIM Beatriz Marinello.  We thank GM Boris Gulko for the opportunity to interview him.

WIM Beatriz Marinello: How do you feel about being chosen as one of the 2011 US Hall of Fame Inductees?

GM Boris Gulko: Of course, I am proud.

BM: What did you think about the induction ceremony and the new Chess Museum?

BG: Both (the induction ceremony and the chess museum) were very impressive.

BM: How did you learn how to play chess?

BG: I was introduced to chess by a boy at a children’s camp. But, the only thing I remember about the boy is that he wore a red cap.

BM: What chess players had the greatest influence on your style?

BG: Different players impressed me at different times. I started to play actively in the years of Mikhail Tal, which was very important for my formation.

BM: You are known as a strong middlegame positional player and for your solid style. What advice would you give for those chess aficionados who would like to become good positional players?

BG: It is useful to study positional games of grandmasters with good annotations. I can recommend a book I wrote with GM Sneed titled, “Lessons with a Grandmaster.”

BM: You have a plus score against former World Champion Garry Kasparov.  How did you achieve this result? Was it preparation or do you think that your style allows for good defensive play against aggressive players?

BM: What do you consider the highlights of your chess playing career?

BG: Probably my winnings in the USSR and USA Championships.

BM: What do you think is the best game you ever played?

BG: I’ll name the most beautiful. My game with David Bronstein in 1968.

Note:  A selection of GM Boris Gulko’s games will be published in the next volume of “Lessons with a Grandmaster”.

BM: What do you think is the ideal format for a national championship?

BM: You are the only chessplayer who became both USSR and USA National Champion.  What were the differences between Soviet Chess and American Chess back in the 1980s?

BG: The list of players. In the USSR Championships my opponents were Tal, Petrosian, Smyslov, Polugaevsky, and Geller.

BM: Obviously around that time (1970s) the level of the Soviet players was much higher than the players from the rest of the world with some exceptions such as Bobby Fischer, Larsen, etc.  Now adays, the chess demographics for the strong players is different compared to those times.  What do you think was the reason for this change?

BG: Political changes in the USSR is the first of all.

BM: You and your family immigrated to the United States back in 1986 from the Soviet Union.  25 years later the world is completely different.  What do you think is the biggest difference in chess during this time span?

BG: I think the biggest difference is the role of computers. How to study and analyze openings is completely different.

BM: In June 1990 Russia declared it’s right to rule itself. That same summer the other republics also declared their right to self-rule. This later resulted on Gorbachev’s resignation which ended the Soviet Union. In your view, how did these historical events impact the chess world?

BG: The biggest change was that players from the former USSR obtained opportunities to freely travel abroad and settle in others countries.

BM: Do you think that chess in the USA has benefited from the immigration of chess players and trainers from other countries?

BG: Of course. It is the American way. The culture and science of the USA has always benefited from the immigration of people from other countries.

BM: Scholastic chess is booming, we have more children than ever learning and playing chess. However, most young talented American Grand Masters are not staying in chess. Why do you think?

BG: Obviously there is not enough money in chess to attract young people to the profession of a chess player.

BM: Last year, I read the book “The KGB Plays Chess”, for which you are one of the co-authors. Your contributions to this book touched my heart, and helped me understand you and many other people in similar situations on a much deeper level.

What can you tell us about your experience in writing this book that is not known to the public?

BG: I finished my book, “The KGB Plays Chess”, the moment of our immigration to the USA from the USSR. Many interesting events happened after that.

BM: The FIDE President has created the Commission for the Modernization of Chess in response to proposals from different players, and changes in chess mostly associated to opening theories and computer assistance.   What are your thoughts about this?

BG: I would be very careful about the changing of chess rules.

BM: What is your opinion about GM Kasimdzhanov: Open letter to FIDE – with a proposal to address “short draws” The article can be found at the Chessbase website at: http://chessbase.com/newsdetail.asp?newsid=7387?

BG: Some formats, like short matches with elimination, provoke short draws. I would recommend formats, which stimulate good chess. Of course players like to play chess. But conditions for this are sometimes bad, like the lack of rest days.

BM: If you were given the power to make regulations to stop people from cheating,  what measurements would you take?

BG: I don’t see it as a serious problem. But if somebody is caught cheating, he or she has to be excluded from tournaments.

BM: Due to technology, chessplayers can now acquire information very quickly to aide in their chess studies.  What in the past could be learned in 10 days, can now be learned in two.  Do you agree with this statement?

BG: I agree – computers made a great change in studying chess.

BM: Do you think studying chess with the aide of a computer and chess software can result in gaps in the knowledge of the game? Any advantage to studying the old fashion way?

BG: I would recommend that both methods be combined.

BM: Are you one of those people that believe that if you could live your life all over again would do the same things?

BG: Positively not. There are a lot of interesting things in our World.

BM: I am have always been intrigued by this last question. I know you are an experienced coach and your answer can really help others.

How does one know when a chessplayer has reached his or her maximum potential?

BG: When he or she becomes a World Champion.

BM: That definitely gives our young players something to aspire to. Congratulations again! I have great respect for you as a player. I would like to also thank you for being my second at the 1991 Women’s Interzonal which took place in former Yugoslavia.  I definitely learned a lot from you as I am sure many more have. Best wishes to you and your family.

Thank you on behalf of the U.S. Chess Trust!