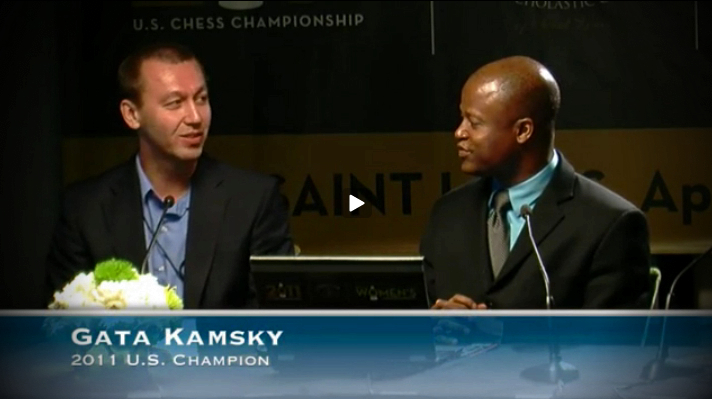 After an opening miscue led to a struggle for equality, GM Yury Shulman conceded a draw to GM Gata Kamsky and with it the title of 2011 U.S. Champion. Kamsky also won the title last year in another final-round game with Shulman. Kamsky won $40,000 for first place, plus $2,000 more for winning his preliminary group. His first title was in 1991.

Kamsky won yesterday in the first game of their match, putting Shulman in a must-win situation today, but he never seriously pressed. “I had to survive all game,” Shulman said. Shulman is the 2008 U.S. Champion, and he earned $30,000 for his second-place finish this year.

“He should have done what he did last year against me in the rapid game – played slowly to build up pressure,” Kamsky said. “After he played e4, I realized it was almost done.” Shulman agreed that his seventh move was imprecise. “I should have shown some fight,” Shulman said.

Prior to Kamsky, the last American to successfully defend his national championship was GM Lev Alburt in 1984-1985.

In the U.S. Women’s Championship, IM Anna Zatonskih and WFM Tatev Abrahamyan played more than five hours before the game ended in a draw. The two nearly played down to king versus king. Their two-game classical match ended in a 1-1 tie, necessitating tiebreaks tomorrow. They will play a two-game rapid match (G/25 with five-second increment), followed by a G/45 Armageddon bidding match if needed. The winner will earn the title of U.S. Women’s Champion and $18,000. Second place earns $12,000.

“I thought I was totally lost,” Abrahamyan said after the game ended. Players who had already finished their tournament were downstairs furiously analyzing the endgame. Few definite conclusions were made and the two women had a host of important decisions to make with less than two minutes remaining on their clocks.

In the third-place matches, defending champion IM Irina Krush never faced serious problems in her game with WGM Camilla Baginskaite. “White has to be very precise for an edge, but that wasn’t my goal today,” Krush said. The drawn game follows Krush’s win yesterday to give her a match win and third in the U.S. Women’s Championship. She also qualified for the Women’s World Cup. After playing chess for two weeks with only a day’s rest, Krush left the press room and said, “This ordeal is over.” Krush won $9,500 for third place and an additional $1,000 for winning the round-robin. Baginskaite earned $7,000 plus a $500 round-robin bonus.

GM Robert Hess and GM-elect Sam Shankland followed their draw yesterday with another today. Shankland barely flinched as Black in playing his entire game by only using up one minute on his clock. A frustrated Hess reluctantly repeated the position to ensure he would not get a worse game, and IA Carol Jarecki allowed the early repetition after consulting with the players.

The match skipped any rapid game and weant to an Armageddon tiebreak. Shankland bid 20 minutes and Hess’ envelope was opened to reveal a bid of 19 minutes, 55 seconds. Hess took less time but had the Black pieces and draw odds. Shankland played a complicated system and the resulting imbalance left Hess with too little time to hold the position. With the win, Shankland earned $20,000 and easily his best finish in the U.S. Championship. Hess earned $17,000 for fourth place ($15,000 plus a $2,000 bonus for winning his preliminary group). In 2009, Hess finished in second place.

The final games of the U.S. Women’s Championship will start Thursday at noon local, 1 p.m. Eastern. To follow the action, go to www.uschesschamps.com.