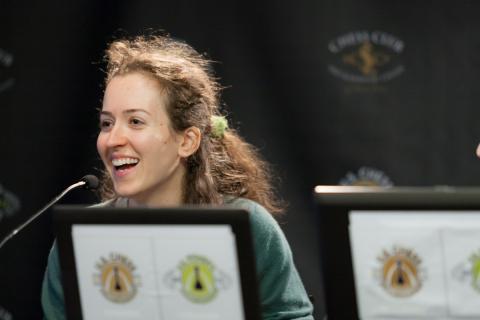 An emotional Krush ran downstairs after the second game and hugged everyone in sight. Zatonskih and Krush have now alternated wins at the women’s championship for the past four years. The duo have won the last seven titles combined, and this was Krush’s fourth in her career.

“That’s a scary-looking position when all you need is a draw,” Krush said during the post-game commentary. After winning the first game, she found herself on the wrong end of an all-out attack. Zatonskih’s two bishops, two knights and queen were all poised to strike. The enemy queen on h3 loomed ominously on one of Krush’s weak light squares. Krush said she simply missed the idea of 19…Ne5 with the idea of heading to g4. She set up a second-rank defense by clearing out her minor pieces, but she panicked after the pin 22…Bf5. While it seems dangerous to stay in the pin, it was better than her chosen alternative, 23. Ng5. The counterattack should have failed, but while all of the fellow competitors saw 23…Qxf1+ right away, Zatonskih sat there analyzing for several minutes.

Though Zatonskih’s 23rd move was not the best, she still had a much more pleasant position. Krush labored to find more defensive moves and had to sacrifice an exchange almost right away to prevent the loss of her c4 pawn and the subsequent demise of her lone bishop.

“It wasn’t even easy to get to that losing position,” Krush said. She was down to fewer than five seconds repeatedly, but stayed alive with the five-second increment. The two previously had a contentious title decided in 2008 without the use of increment. Zatonskih squandered her six-minute advantage but still kept a winning position. She eventually found an invasion for her rooks. After Krush’s 47. Ne5 to defend the c-pawn, Krush expected 47…f6 to deflect the knight, after which she said, “Black is just losing of course.”

Instead, with her clock almost expired, Zatonskih played 47…Rxc4 almost immediately. The recapture 48. Nxc4 ended the game, as Zatonskih resigned right away.

“Anything can happen when you’re down to five seconds,” Krush said. “It’s not every day that your opponent gives you a rook – twice!”

In their first game, Krush equalized with the …c6 variation of the Modern Defense. Zatonskih had the possibility to repeat the position by chasing Krush’s queen back and forth, but instead chose the risky advance g4. Krush’s knight sortie to e4 turned the tables, and eventually her queen probed the weak white king. After landing on f3, and with both rooks on the second rank, Zatonskih could not find an answer in the few seconds she had remaining and lost on time.