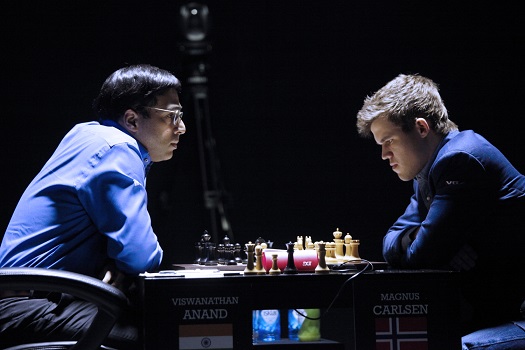 Magnus Carlsen won the 11th Game of the Match and secured the title with one game to spare. 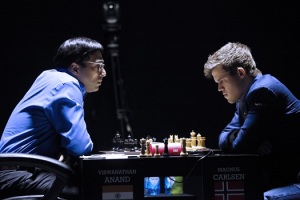 The eleventh game of the World Chess Championship match between Magnus Carlsen (Norway) and Viswanathan Anand (India) was played on November 23rd in the Main Media Center in Sochi. Magnus Carlsen had White.

For the sixth time in this match the champion opened the game with е2-е4. The players continued the theoretical discussion in the Berlin variation, however, this time Anand chose a different 9th move, evacuating his king on the queenside and opting for a more aggressive game. In this line Black attempts to connect rooks as soon as possible, and sometimes can seize the initiative, if he neutralizes White’s pressure in the center.

The former champion demonstrated a new and interesting idea – he carried out g7-g5 in order to stop White’s pawn advance of the kingside, not worrying about the weakened square on f6. Black successfully solved his opening problems, and when the World Champion got somewhat carried away maneuvering his knights, Anand made a nice break b6-b5, sacrificing a pawn for the initiative. The champion declined the offer and switched to defending.

The critical moment occurred on the move 26. After a lengthy consideration Anand decided that quiet play does not give Black enough winning chances, and sacrificed an exchange, obtaining a dangerous passed pawn on the queenside in return. Generally this sacrifice is typical in similar positions, however in this position it was refuted tactically. Carlsen broke through in the center and invaded the 7th rank with his rook, forcing Black to defend. The World Champion was very precise during the technical stage, and on the move 45 Vishy Anand congratulated his opponent on winning the match.

The grandmasters agreed that the match was very tense. Vishy Anand said that “Magnus is very strong and I have to admit that he was better. My nerves gave up first, and psychologically Magnus was holding up well.”

Magnus Carlsen: “Anand played better than in previous match and this time he really pushed me.” He also said he is very happy with the way the match was organized, and his whole team was treated well. 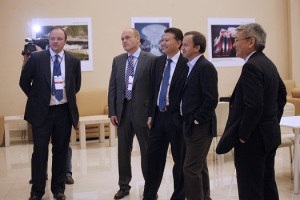 At the game present were Kirsan Ilyumzhinov, FIDE President, Arkady Dvorkovich, the Deputy Prime Minister of Russia, Chairman of the Championship Organizing Committee, Andrey Filatov, President of the Russian Chess Federation, Mark Gluhovsky, Executive Director of the Russian Chess Federation, Nikolai Nikiforov, Minister of Communications and Mass Media of Russia and others.