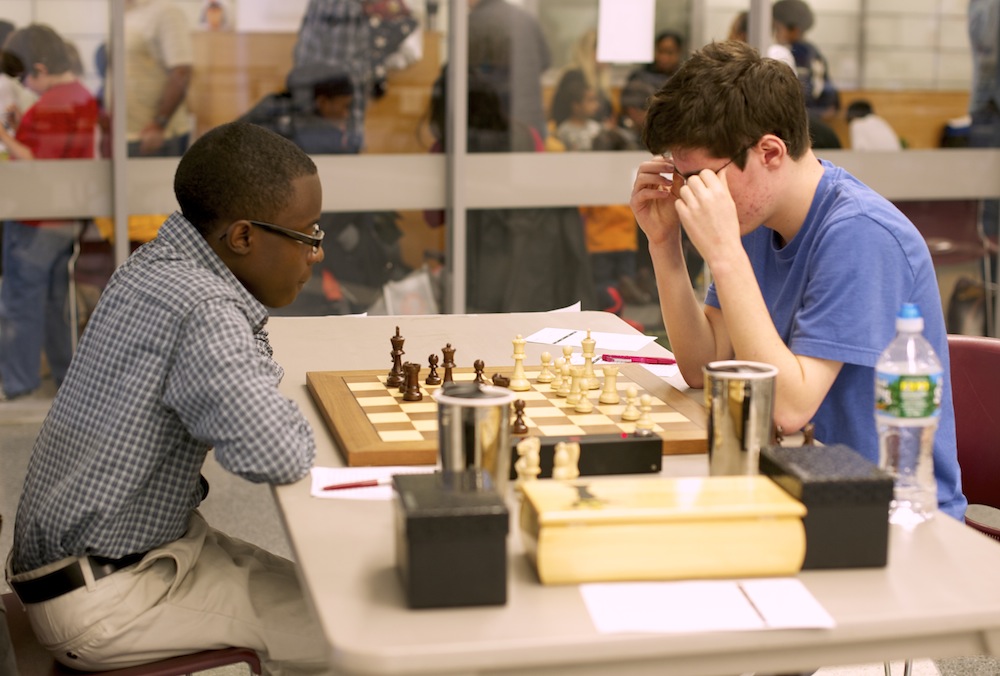 As Hurricane Sandy headed to the North East (USA), the monster storm did not stop young chess players from participating in the 2012 New York City Rapid Chess Challenge, which was held at the United Nations International School (UNIS Manhattan Campus) on October 28th, 2012. This event included a scholastic tournament and a three games match between two of the top USA cadet players, 15 year old Michael Bodek (2413) and 14 year old Joshua Colas (2395).

Die-hard chess players and chess parents are known to weather snow storms and challenging weather conditions all to play chess.

The school’s Manhattan campus with it’s views to the east river welcomed players and their families for a day of rapid chess and face-painting, a feature added to the tournament considering the upcoming Halloween holiday.

Players and parents lined the halls of the school in anticipation of the tournament and checked for weather updates on their mobile devices.

It was an unusual day, public transportation was scheduled to shut down in New York City later that evening, which made for a tight schedule. But, the children had a blast!

Among the guests was Julie Menin, a candidate for Manhattan Borough President and proud chess mom, shown above making the first move for Joshua Colas in the exhibition match

We would like express our appreciation to ROSNEFT, FIDE Chess in the Schools, Dr. Lidana Jalilvand Director of Special Programs at the United Nations International School (UNIS), our wonderful staff and the chess players and chess parents who make a commitment to bring chess to their children’s lives.

I would like to thank FIDE Chief Executive Officer Mr. Geoffrey Borg and Project Manager, Anastasia Sorokina for coordinating the ROSNEFT Training project with Chess Educators in New York City.

It is wonderful when people who make up our chess community support chess events and tournaments and see the value in it. Young chess players deserve our commitment.