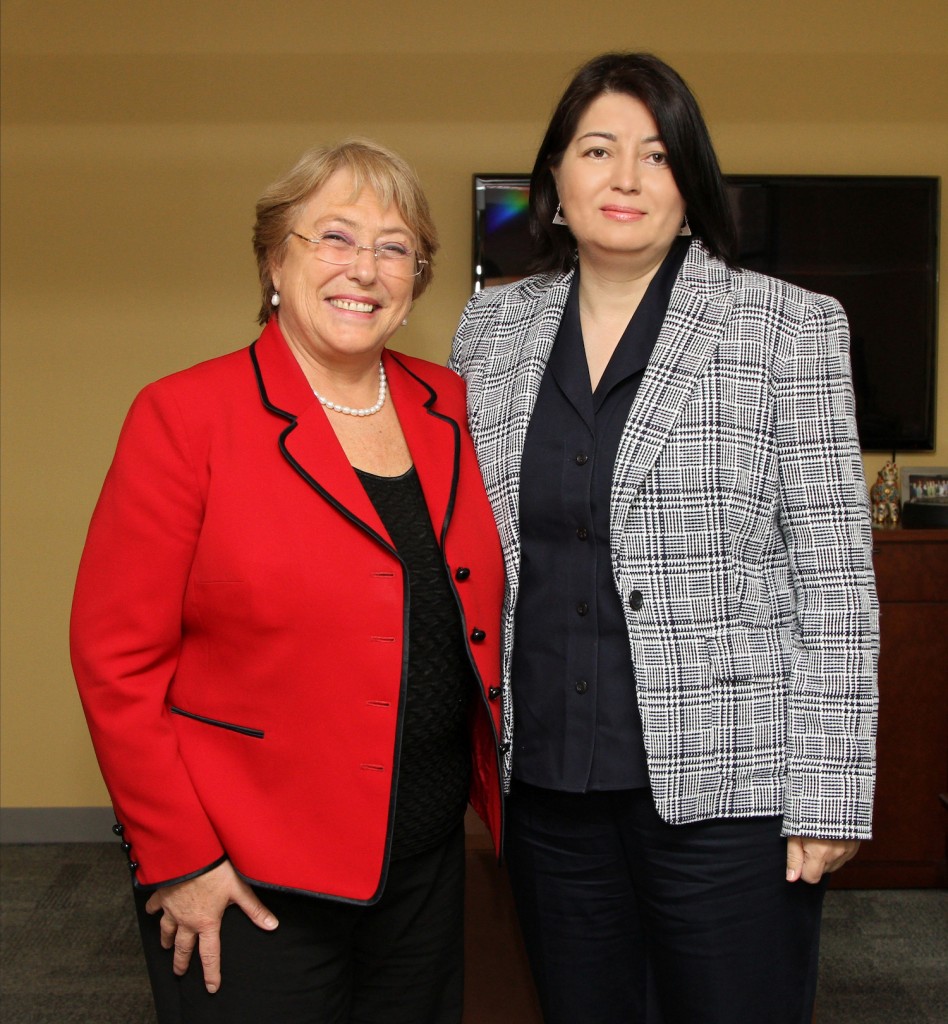 Meaningful dialect with global organizations such as U.N. Women serve as a positive motivator for great accomplishments, in and outside of the chess community.  Working towards a common goal can result in a very positive exchange, one which can have great benefits for humanity.

The United Nations General Assembly approved the creation of the United Nations Entity for Gender Equality and the Empowerment of Women—known simply as U.N. Women in 2010. Intended to give (in Secretary-General Ban Ki-moon’s  words) “a much stronger voice for women and for gender equality” around the world, the organization replaced four underfunded and obscure bureaucracies devoted to women with a single entity that would finally give half the world’s population the high-profile platform it deserved.

Leading the new organization and charged with boosting it’s profile is one of the world’s most powerful and inspiring women, Dr. Michelle Bachelet, the former president of Chile.

Both U.N. General Secretary Ban Ki-moon and U.S. Secretary of State Hillary Clinton said that they worked hard to persuade Dr. Bachelet to accept the post, pledging their support, convincing her that U.N. Women would be more than the sum of it’s predecessors, and appealing to her sense of duty to help women.

For the World Chess Federation (FIDE), partnering with like-minded organizations for a common goal is key to the betterment of our societies. For those of us who have dedicated our lives to chess and the promotion of it’s educational value, it makes perfect sense to make the connections in and outside of our communities because we have witnessed first-hand the benefits of chess.

Chess as a tool to promote positive change has long been a focus across many countries including the United States. Many organizations are working to bridge the gap between the social and economic differences that impact people across the world.

Chess involves all levels of critical thinking, improving areas of your brain across the two hemispheres – it’s the  “brain booster”.  It also encourages socialization skills that extend across cultures and generations. It only makes sense that we promote chess, not solely for the game, but the benefits it provides.

How can chess extend it’s impact and make a greater difference?  This is a question which searches for many answers, there is no one ‘right way’, there are many ways.

The meeting between the U.N. Women Executive Director, Dr. Michelle Bachelet and FIDE Vice President, Beatriz Marinello included talks about chess, women’s role in chess, the importance of empowering girls and women aiming for equality and building a better world for all of us.

The initial projects will focus on leadership and participation by introducing chess to young girls ages 4-6.  Gender equality in chess is a big issue, 19% of the FIDE National Federations don’t have women with FIDE ratings, and the percentage of women and girls who play chess in the world is around 2% of the overall population of chess players (including casual players).

The second project discussed during this meeting was support for women in prisons aiming to empower them and increase their self esteem.

There will be a follow up meeting to touch base on the process of the strategic plans for these two new projects.  GM Darcy Lima, FIDE Advisor for Social Projects, Mr. Pablyto Ribeiro, and Mr. Charles Neto are also expected to attend the meeting at U.N. Women to give a presentation of the Brazilian Model for the Prison system and the connection with chess.

This partnership is the beginning of a new approach that can help women to increase their participation in chess and break the cultural barriers to empower girls and women to excel in mathematics, science and as leaders for the future.